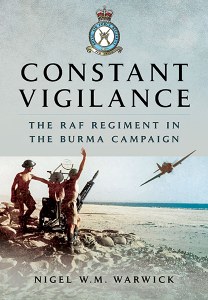 The RAF Regiment was created in the early years of World War II for the active dedicated defence of RAF airfields and installations. This books concerns the Regiments operational history in South-east Asia Command and draws on the diaries and recollections of the men who served in that theatre. It is strongly supported by maps and diagrams from official records.

The Regiment played a vital and significant role in the two major battles for Burma, Imphal and Meiktila. The struggle at Imphal ranks alongside Stalingrad and Alamein in its significance for the defeat of the Axis. From humble beginnings, the Regiment in Burma had by 1945 become a highly-trained specialist ground force capable of defensive and offensive action.

The successes of the 14th Army were founded on the support of the transport, fighter and bomber squadrons. The RAF could not have done this as effectively without the confidence that its airfields and vital installations were safe under the constant vigilance of the RAF Regiment.