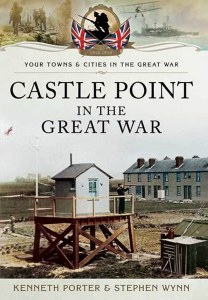 Castle Point in the Great War

Brief history on the various parishes that make up the Borough of Castle Point and what life was like prior to 1915. It includes stories of suspected aliens, conscientious objectors (The peculiar People), those who claimed exemption for business reasons and British overseas internees.

This book is one of a series written about towns and cities in the Great War. It tells the story of the Borough of Castle Point, including the ecclesiastical parishes of South Benfleet, Canvey Island, Hadleigh and Thundersley. The book is divided into seven chapters and although the book is primarily about these parishes additional information is given on other aspects of the Great War. It tells of the memories and recollections of those who volunteered to fight. The introduction to the book gives a brief outline history of the parishes and their names, mainly Anglo Saxon in origin. Chapter one describes the south east Essex parishes before the First World War, complete with original photographs and newspaper extracts. Chapter two denotes itself to a fairly comprehensive but uncomplicated resume of the causes of the war and its early stages. In Chapter three the book ceases to be generalised and instead concentrates on more specific aspects: foreign internees, including descriptions of individuals, conscription, and The Defence of the Realm Act and its consequences, both nationally and locally. The following three chapters deal with the war at sea, in the air and on land. There are plenty of examples of individual stories, with photographs and extracts from newspapers, and in many cases details of honours and awards. The concluding chapter deals with the aftermath of the war, the terms of surrender and the need for war memorials. There is a complete list of those remembered on the war memorial in each parish. Both authors have corroborated on previous history books. Although a book primarily intended for those interested in local history, I found it an extremely enjoyable read, probably because of the inclusion of invaluable newspaper reports, photographs, handwritten accounts and poems. Bronwyn Fraley Friends of The National Archives http://nationalarchives.gov.uk/get-involved/friends.htm