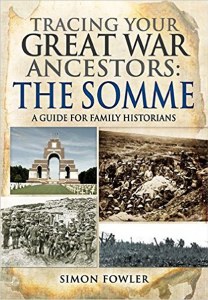 If you want to find out about an ancestor who served on the Somme during the First World War - during the Battle of the Somme in 1916 or at any time during the fighting in this sector of the Western Front - this book is the ideal guide. It provides practical information and advice on how to conduct your research. It will help you to discover when and where your ancestors served and give you an insight into his experience of the war.

It is also a fascinating introduction to researching the Great War as a whole. Simon Fowler outlines the course of the fighting on the Somme, introducing the many historical resources that you can use to explore the history for yourself. He identifies the key sources for family historians, including at The National Archives and Imperial War Museum and the many online sites that researchers can turn to.

There is also advice on the literature, archives, museums and monuments that may help you to gain an insight into your ancestor's story.

Simon Fowler, a most eloquent military historian has written yet another interesting and excellent guide. This book not only gives the reader a brief insight into the catastrophic events of the campaign, but also guides the beginner family historian, and the experienced researcher alike, through the myriad of resources. Chapter One is dedicated to a short and dispassionate description of the desolate and unfortunate attack by the Allies. It also highlights the bravery, morale and strengths of the Anzacs. Fowler highlights the fact there has been much already written with hypotheses about the reasons for the failure of Gallipoli, and as such he does not seek to offer an opinion. Chapter Two describes the unfortunate and beleaguered lives of the soldiers. This includes a descriptive firsthand account by the war journalist Ellis Ashmead-Bartlett, who was one of lucky ones, of the last major battle, the British attack on Scimitar Hill. These two chapters form nearly half the book but give the reader a brief, but detailed account of events. Chapter Three gives a general guidance to military archives and possible pathways for researching the Gallipoli campaign and the rest of the First World War. Fowler has inserted here a moving firsthand account of life in a trench by Sir Alan Herbert, which was extracted from 'The Secret Battle'. Chapter Four provides a hand-holding exercise for a family historian around the available sources for obtaining a general picture of their ancestor's service. These sources include medal index cards, surviving service records for both commissioned and non-commissioned alike, The London Gazette and others. There are pointers for identifying details through family photographs, through the Commonwealth War Graves Commission and through a myriad of resources. The chapter ends with another extract from 'The Secret Battle', a chilling account of the landing on Gallipoli. Similarly, Chapter Five guides the researcher through service records and ends with another informative firsthand account. The penultimate two chapters focus on Naval and Marine personnel research and troops from the five dominions (Australia, Canada, Newfoundland, New Zealand and South Africa) and India. Finally, if one might consider visiting Gallipoli, Fowler helpfully steers one through the available options. This edition in the Tracing your Great War Ancestors series gives researchers a comprehensive guide to available resources on Gallipoli. This is a very worthwhile read. Celia Lassen Friends of The National Archives http://nationalarchives.gov.uk/get-involved/friends.htm

The Middlebrook Guide to the Somme Battlefields

Tracing British Battalions On The Somme

Visiting The Somme And Ypres