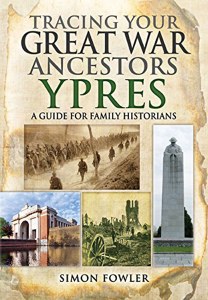 Do you have an ancestor who served at Ypres in the First World War, during the four years in which the city was in the front line? Perhaps you have thought of visiting the battlefields nearby and the monuments that commemorate them, and want to find out exactly where your ancestor served and what part he played in the four great battles that took place there? So many British soldiers served in Flanders during the long struggle to defend the Ypres Salient and to break out of it that there is a good chance that your ancestor was there at some stage of the war. This practical and informative handbook is an ideal guide to the struggle for the city and the stories of the men who took part in it. It is also a fascinating introduction to researching the Great War as a whole.

Simon Fowler outlines the course of the fighting around the city and he introduces the most important historical resources that you can use to explore the history for yourself. The book identifies the key sources for family historians, including at The National Archives and the Imperial War Museum, together with the many resources online that researchers can turn to. There is also advice on the literature, archives, museums and monuments that may help you to gain an insight into your ancestor's story.

This is a thoroughly well researched and comprehensive book. It gives the family historian a myriad of ideas and leads to pursue. It is also extremely easy to read. Even for those well-informed historians, this book is worth taking a look at. Simon Fowler, an expert in the field himself, appears to leave no stone unturned in helping one pursue one's own research or that of a particular regiment or genre. This is not just for researchers of Ypres and its environs - it is a useful tool for general Great War researchers. If you are researching your ancestor in the Royal Naval Division, there is only a small section in chapter 1. However, that is totally understandable, as Ypres is inland in Belgium and one might not have expected to find any reference to the Royal Naval Division. Chapter 10, Researching Units, gives the reader a clear concise précis of the British Army organisation during the Great War. Anyone confused about the differences between Battalions, Divisions, Regiments, Corps and so on, could read this chapter and be greatly enlightened. In fact, Fowler gives clear guidance to many routes of research, through individual chapters on Women, Dominion and Indian Troops, Pensions, Courts Martial and others. Simon Fowler also makes the very valid point of considering a donation of any private papers to the Imperial War Museum. As Simon says all donations greatly add to the considerable wealth of resources for future researchers. There is just one very small point in the chapter on Tourism and particularly relating to the availability of food and hotels for the visitor to Ypres. This writer's recent experience was different. Good places to eat and stay were numerous. All in all this volume is a worthwhile read and an aid for anyone interested in the subject of the Great War of 1914-18, and is to be recommended. Celia Lassen Friends of The National Archives http://nationalarchives.gov.uk/get-involved/friends.htm