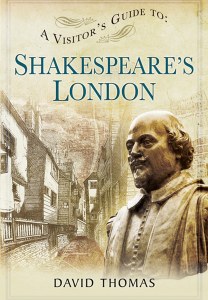 A fresh and colourful look at Shakespeare's London published on the 400th anniversary of the playwright's death. Readers can explore the streets of Shakespeare's London and see the sights he saw, while learning how people ate, drank, misbehaved and had fun. You will discover what it was like to be a tourist in the sixteenth century from the voices of people who came to London during Shakespeare's day.

You will travel with them to the major tourist sights and will learn how to get about, where to stay and what to eat and drink. You will visit the royal palaces, London's famous gardens, the Tower of London and Old St Paul's Cathedral. You will discover the pleasure of London's theatres, the sports people played and the shopping they enjoyed.

As now, London was famous as a shopping destination. But beware, London is full of people who will pick your pockets or trick you out of your money and you are constantly at risk from the plague or even the polluted water supply. Most of the London Shakespeare knew has been destroyed by fire, war and developers, but a surprising number of buildings and places which he knew still survive.The book contains guided tours which show you to sample the atmosphere and see the sights which Tudor tourists enjoyed.

This title will appeal to Shakespeare lovers, social history fans, fiction and drama lovers, students and anyone with an interest in this fascinating era of London's history.

This book aims to flesh out the generic impressions we may have of what Shakespearian London was like. David Thomas has set out the main part of the book just as if it were the contemporary type of city guides many of us now buy before holidays. This at first resulted in my finding some confusion over tenses that was distracting, though only briefly. This enables the information to be presented in very accessible way. For instance, there are chapters on eating, drinking and shopping, must-see sights, entertainment among others, each of which makes any of the known Shakespearean connections clear. The author's use of four sources of letters and papers of 16th century visitors from continental Europe and three British writers, all introduced and named in the introduction, gives colour to the historical outline. For many readers, who will not have access to these resources in the original, this is very helpful. The penultimate chapter is 'Walks', which does precisely what the title implies - three walks are outlined that a present day visitor can take, through the City of London, through Southwark and one called 'Legal London'. There are detailed guides through these areas with descriptions of what you can see and what you might once have seen. I have not yet tried any of them but certainly they look inviting! (They were written by Andrea Thomas.) The last chapter is a guide to the buildings mentioned in the book, detailing the address by postcode and street name and, where known, the admission times of those which are open to the public and those which need pre-booking. It came as an initial surprise to me that there were no website addresses given for any of these venues, but the rapidity with which some websites change and information is rendered obsolete may be a reason to avoid this. The book has a small number of illustrations, including some fascinating maps, ancient and modern, and also a short bibliography and index. For anyone with an interest either in Shakespeare or older parts of London this would make a good gift to encourage them to explore further. Heather Noel-Smith Friends of The National Archives http://nationalarchives.gov.uk/get-involved/friends.htm

What's So Special About Shakespeare?