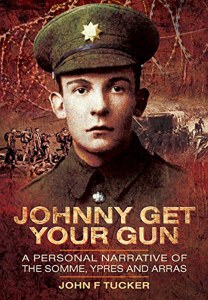 Johnny Get Your Gun : A Personal Narrative of the Somme, Ypres And Arras

At the age of seventeen-and-a-half, full of idealism and patriotism, John Tucker enlisted as an Infantryman in the London Kensington Regiment and reached France, after training, in August 1915. Against all odds he survived three years of bitter trench warfare, was seriously wounded, and returned to Blighty a few months before Armistice Day. During those years he took part in the Battle of the Somme, the battles of Arras and Cambrai, and the Third Battle of Ypres.

Yet though his patriotism remained unflinching, his idealism gave way to the grim realities of day to day survival in the trenches and, as he began to understand what constitutes courage, he grew from boyhood to manhood. The author contrasts the beauties of the French countryside with the ugliness of widespread death and destruction, and paints a picture of French country life hardly less squalid than the soldiers' own lot. But above all, he makes the reader realise what it was like to fight in the war to end all wars.

These are the memoirs of one Infantryman, but through his eyes a vivid canvas of the whole war gradually unfolds.