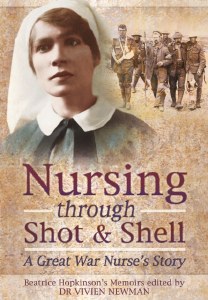 Nursing Through Shot And Shell : A Great War Nurse's Story

This recently discovered memoir gives an intimate glimpse into the Great War service of Beatrice Hopkinson, a Territorial Forces Nursing Service Sister, who remained steadfastly and true to her profession as she nursed through shot and shell. Dr Vivien Newman's meticulously researched Introduction brings Beatrice's world out of the shadows, juxtaposing her war service against the background of the Army Nursing Service, where dedicated, professional nurses worked closer to the Front Line than women could have ever previously imagined doing. Beatrice was selected for the most onerous type of duty in the bitterest phase of the war.

She had arrived in St Omer in the summer of 1917 when the town was being continuously bombed. With her hospital under nightly attack, Beatrice simply got on with the job she had come to France to do: saving the lives and easing the dying of soldiers on the Western Front. For Beatrice, spring 1918 was marked by a 'sea of blood'.

Caught up in the British Army's headlong retreat when hospitals and patients risked being captured by the enemy, she and her 'rapid response' team were rushed between several Casualty Clearing Stations in France and Belgium.They operated on thousands of soldiers wounded in Germany's final attempt to win the War. As the fortunes of war finally turned in the Allies' favour, Beatrice advanced through Belgium, a land destroyed by war and enemy occupation. This diary gives rare insight into the realities of Front Line nursing through the eyes of someone who had never anticipated working for the Army but who, when her country called, willingly and steadfastly answered.