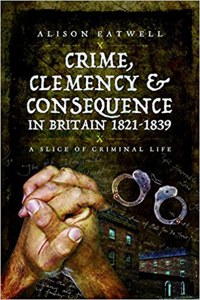 From the woman who steals a cloak, to the highwayman and the middle-class forger, this book allows us a glimpse of the rich mix of criminals, their crimes and sentences, in early 19th Century Britain. With no statutory right of appeal against either the verdict or sentence at this time, the prisoner's only hope for relief was to petition the Crown for mercy via the Home Office, and with sentences including death and transportation, the stakes were high. The petitioner's objective was to prove the prisoner worthy of mercy, usually by establishing their respectability, and it is upon these petitions this book draws.

Many of the thousands of petitions, held by the National Archives in Kew, reveal fascinating incidental information about the prisoner's personal life or circumstances which cannot be found in other records. The supporting documentation, witness depositions or character references, often give us rare details of everyday routines, working conditions, illnesses, relationships, and life in a locality. As cases are followed in this book, some far beyond the Home Secretary's decision, the criminals, supporters, prosecutors and judiciary are brought to life, occasionally with surprising results.

Read as individual cases, each subject is fascinating; viewed together, the collection reveals a unique, intimate and vivid insight in to life in 1820s and 1830s Britain.

Alison Eatwell has an easy narrative style which she uses to good effect in this study of early nineteenth-century petitions for clemency, which were laid before the Home Secretary in the hope that a convict might gain a revocation or reduction of his or her sentence. The book offers a snap-shot in time of the many years during which certain convicts were likely to receive the death penalty, be sentenced to transportation to one of the oversees colonies, or serve a term of imprisonment with an additional order of hard labour. In other circumstances transportation was sought as a reduced sentence for a convict who might otherwise have been executed. The records of those appeals provides evidence of the experiences of individual prisoners. Eatwell makes effective use of the original petitions held by The National Archives in series HO 17 and HO 18 to extract evidence of the daily business and conditions in the London prisons of Millbank and Newgate; on the hulk ships used to alleviate pressure on an overcrowded prison system or hold prisoners awaiting transportation; and in the penal colonies in New South Wales and Van Diemen's Land. The author similarly uses case studies to examine some of the offences typically represented in the records, namely: bigamy, forgery, assault with a deadly weapon, murder and offences of a sexual nature. Petitions were submitted to the Home Officer by convicts, their friends, relatives and other associates with the intention of establishing a convict's good character and proving him or her worthy of mercy. As such, the documents often include details of a prisoner's personal circumstances and family background. Eastwell does not ignore the self-serving nature of a convict's appeal for mercy, or the fact that the records are at best a highly edited version of events and circumstances. With that in mind, she examines the subjective nature of the appeal process, when the social standing of a petitioner or the extent of local support for a particular convict might influence the response received. Rhiannon Markless Friends of the National Archives http://nationalarchives.gov.uk/get-involved/friends.htm