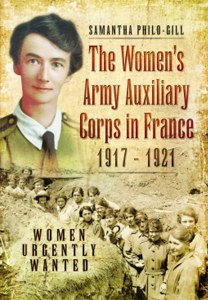 In March 1917, the first women to be enrolled into the British Army joined the newly formed Women’s Army Auxiliary Corps (WAAC). The women substituted men in roles that the Army considered suitable, thereby freeing men to move up the line. The WAACs served, for example, as cooks, drivers, signallers, clerks, as well as gardeners in the military cemeteries. Due to their exemplary service, Queen Mary gave her name to the Corps in April 1918 and it became Queen Mary’s Army Auxiliary Corps (QMAAC). By the time the Corps was disbanded in 1921, approximately 57,000 women had served both at home and in France.

This book details the establishment of the Corps and subsequently explores the experience of the WAACs who served in France. It follows the women from enrollment to the camps and workplaces overseas, through to their experiences of the Spring Offensive of 1918, the Armistice and demobilization. The final chapter reviews how the women have been remembered in art, literature, museums and memorials. Throughout the book, the author locates the women in a society at war and examines how they were viewed by the Army, the general public and the press.

The author draws on a wide range of sources to provide the background and uses the oral and written testimonies of the women themselves to tell their stories. This book will be of interest to social, women’s and military historians, as well as family history researchers.