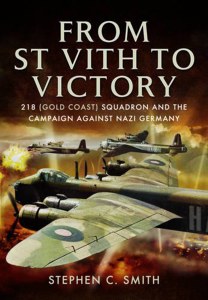 From St Vith To Victory : 218 (Gold Coast) Squadron and the Campaign Against Nazi Germany

Compiled from a variety of sources and first-hand accounts, this book is an authoritative record of the part played by No.218 (Gold Coast) Squadron during the bomber offensives of World War II. The squadron's activities are described in detail offering a unique insight into the lives of those involved and saluting the important role that No.3 Group and No.218 Squadron played in Bomber Command's ultimate victory. No.218 Squadron was formed a few months before the Armistice which brought to a conclusion the Great War.

Disbandment soon followed, rendering the squadron number plate dormant until the rise of National Socialism in Germany. The squadron was reformed in 1936 and spent the remaining peace time years honing its skills, skills that would be tested from the very first day of the bomber offensive against Germany to the very last.