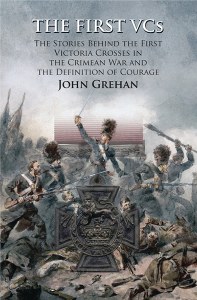 The First VCs: The Stories Behind the First Victoria Crosses in the Crimean War and the Definition of Courage

Officers led and men followed; all were expected to do their duty without thought of reward. Enlisted men rarely penetrated the officer ranks and promotion owed more to money than merit. Then came the Crimean War.

The incompetence and ineffectiveness of the senior officers contrasted sharply with the bravery of the lower ranks. Fuelled by the reports from the first-ever war correspondents which were read by an increasingly literate public, the mumblings of discontent rapidly grew into a national outcry. Questions were asked in Parliament, answers were demanded by the press - why were the heroes of the Alma, Inkerman and the Charge of the Light Brigade not being recognised? Something had be done.

That something was the introduction of an award that would be of such prestige it would be sought by all men from the private to the Field Marshal. It would be the highest possible award for valour in the face of the enemy and it bore the name of the Queen for whom the men fought. This is the story of how the first Victoria Crosses were attained in the heat of the most deadly conflict of the nineteenth century.It is also an examination of how the definition of courage, as recognised by the awarding of VCs, evolved, from saving the regimental colours at the Alma to saving a comrade in the No Man's Land before Sevastopol.