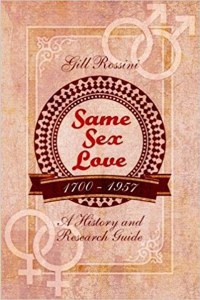 Family history is often seen as the stories of people who were part of a traditional family unit, married to someone of the opposite gender, had children and lived their lives as 'normally' as possible. But what of the relatives who could not accept that this was the life for them, and were attracted to same-sex partners? Was it possible for them to live their life as they wished to, with their chosen partner and without hindrance, ridicule or attack? Would they be breaking the law in doing so, and how would family and society react if they were found out? Some of those concerned married and had children, like the majority, and buried their feelings in the bustle of everyday life; others stayed single but abstained from relationships altogether, as a way of keeping safe. A number managed to live openly and proudly as themselves, challenging the prejudices and misconceptions of the day.

This is the story of all those people, the brave, the discreet, the frightened, the loving and the loved, as well as love against all the odds; more than likely, it is a story that can be found in every family history. Told in an empathetic and clear-sighted way, this is the first history of same-sex relationships aimed specifically at family historians and offers valuable insights into the lives of those who were often seen as outcasts. It includes research guidance for genealogists researching this often-neglected aspect of family history, and offers invaluable insights into the families, society and culture they lived in.

It is 50 years since the Sexual Offences Act 1967 decriminalised homosexual acts between two men over the age of 21 years, in private, in England and Wales. Gill Rossini's history and research guide to same sex relationships looks back at the cultural, legal and societal restrictions faced by those who dared enter into a lesbian, gay or bisexual relationship. This history of LGB relationships is divided between three core chapters covering each of the eighteenth and nineteenth centuries and the first half of the twentieth century. At each stage Rossini questions whether it was possible for those attracted to same-sex partners to live their life as they wished to. She has a clear narrative style and it is easy to follow her examination of the relatively laissez-faire attitudes towards sex and relationships in the eighteenth century, contrasted with the increasing use of legislation to control and monitor society during the nineteenth century and reign of Queen Victoria in particular. The third chapter includes an examination of how life for women changed during the twentieth century as a growing number of organisations campaigned for women's rights. Rossini considers how the high death toll of young men during the First World War meant that during the inter-war period many single and widowed women found it economically convenient to share a home with another woman, and whether such scenarios benefitted female homosexuals during that period and beyond. In contrast, a growing paranoia towards homosexual men struck Britain and the USA during the 1950's. Rossini observes how the publicity which surrounded the witch hunt of men such as Alan Turing and the trial of politician Edward Montagu helped raise the level of public pressure for a change in the law to decriminalise homosexuality. The result was the Wolfenden report 1957 which lay the foundations for the 1967 Act of Parliament and beyond. The book is aimed at family historians and concludes with a useful research guide for genealogists on examining family records for clues as to same-sex relationships and available archival sources. Rhiannon Markless Friends of the National Archives http://nationalarchives.gov.uk/get-involved/friends.htm

The Book of the Kiss