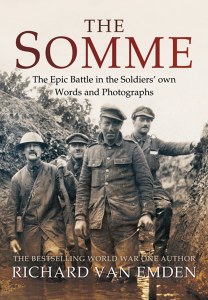 The offensive on the Somme took place between July and November 1916 and is perhaps the most iconic battle of the Great War. It was there that Kitchener’s famous ‘Pals’ Battalions were first sent into action en masse and it was a battlefield where many of the dreams and aspirations of a nation, hopeful of victory, were agonizingly dashed.

Because of its legendary status, the Somme has been the subject of many books, and many more will come out next year. However, nothing has ever been published on the Battle in which the soldiers’ own photographs have been used to illustrate both the campaign’s extraordinary comradeship and its carnage.