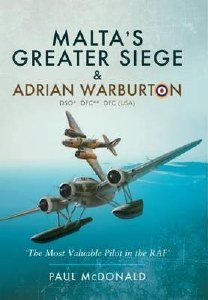 This is a true historical account of war in the air, at sea and on land in the battle for Malta's survival in the Second World War. It was a battle which decided the outcome of the war in North Africa and the Mediterranean. Adrian Warburton, the airman described in the subtitle by Marshal of the Royal Air Force Lord Tedder, went missing in 1944 in a single-seat American aircraft.

He had flown at least 395 operational missions mostly from Malta. Unusually for a reconnaissance pilot, 'Warby' as he was known was credited with nine aircraft shot down. He lay undiscovered for sixty years.

He is the RAF's most highly decorated photo-recce pilot.In Malta, Adrian met Christina, a stranded dancer turned aircraft plotter in the secret world deep beneath Valletta's fortress walls. She too was decorated for heroism. Together, they became part of the island's folklore.

How important was Malta and the girl from Cheshire to the man behind the medals? This tale takes the form of a quest opening in a cemetery in Bavaria and closing in another in Malta.In between, the reader is immersed within the tension and drama surrounding Malta's Greater Siege retracing the steps of the main characters over the forever changed face of the island following its heroic victory.

The Backwash Of War

You Never Know Your Luck