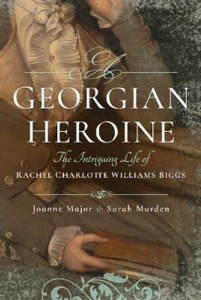 Rachel Charlotte Williams Biggs lived an incredible life, one which proved that fact is often much stranger than fiction. As a young woman she endured a tortured existence at the hands of a male tormentor, but emerged from that to reinvent herself as a playwright and author; a political pamphleteer and a spy, working for the British Government and later singlehandedly organising George III's jubilee celebrations. Trapped in France during the revolutionary years of 1792-95, she published an anonymous account of her adventures.

However, was everything as it seemed? The extraordinary Mrs Biggs lived life upon her own terms in an age when it was a man's world, using politicians as her mouthpiece in the Houses of Parliament and corresponding with the greatest men of the day. Throughout it all though, she held on to the ideal of her one youthful true love, a man who abandoned her to her fate and spent his entire adult life in India. Who was this amazing lady? In A Georgian Heroine: The Intriguing Life of Rachel Charlotte Williams Biggs, we delve into her life to reveal her accomplishments and lay bare Mrs Biggs' continued re-invention of herself.

This is the bizarre but true story of an astounding woman persevering in a man's world.