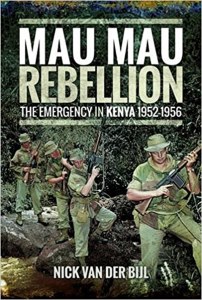 In The Mau Mau Rebellion, the author describes the background to and the course of a short but brutal late colonial campaign in Kenya. The Mau Mau, a violent and secretive Kikuyu society, aimed to restore the proud tribe's pre-colonial superiority and rule. The 1940s saw initial targeting of Africans working for the colonial government and by 1952 the situation had deteriorated so badly that a State of Emergency was declared.

The plan for mass arrests leaked and many leaders and supporters escaped to the bush where the gangs formed a military structure. Brutal attacks on both whites and loyal natives caused morale problems and local police and military were overwhelmed. Reinforcements were called in, and harsh measures including mass deportation, protected camps, fines, confiscation of property and extreme intelligence gathering employed were employed.

War crimes were committed by both sides. As this well researched book demonstrates the campaign was ultimately successful militarily, politically the dye was cast and paradoxically colonial rule gave way to independence in 1956.