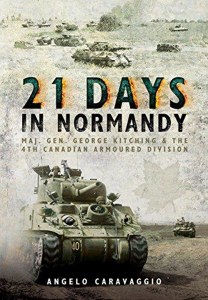 The Canadian 4th armoured division crossed the Channel in July 1944 to reinforce the invading forces and assist in the Allied attempts to breakout of the Normandy beachhead around. They were heavily engaged in Operation Totalize and Operation Tractable but have been criticized for their failure to close the 'Falaise gap' and complete the entrapment of withdrawing German forces. Their commander, Major General George Kitching, was relieved of his command after just 21 days in action.

Angelo Caravaggio re-examines the division's performance and particularly that of its leadership. Using new information, he establishes that, despite entering battle for the first time during one of the most challenging phases of Allied operations in August 1944, the 4th Armoured Division, under Kitching's leadership proved resilient and adaptive in overcoming the volatile and unpredictable nature of warfare in Normandy. The combat operations of August 1944 transformed the division into a battle-hardened combat formation that would later distinguish itself through its ability to generate a sustained drive across France out of the chaos and destruction of the Normandy battles.