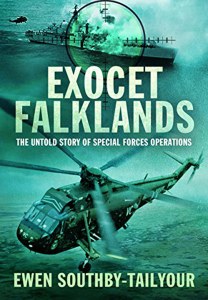 This is a revelatory account of three un-tabulated special forces operations, Plum Duff, Mikado and Kettledrum, that failed to destroy Argentina's Exocet missiles during the 1982 Falkland's campaign. In that context alone this book is of international military importance. Using previously unknown material and through interviewing key players who have remained silent for 30 years, Ewen Southby-Tailyour has finally established the truth: that it has taken so long reflects the sensitivities, both military and personal, involved.

Lt. Col. Southby-Tailyour is particularly well qualified to write this book given his extensive knowledge of naval affairs in general (he served for 32 years in the Royal Marines) and of the Falkland Islands in particular. In 1982 when Britain sent its Task Force eight thousand miles south to re-take the Falkland Islands from the Argentines, a huge concern for the British was the known existence of five Exocet missiles that might be air launched by Super Étendard aircraft against units of the Task Force. For example, if either of the two aircraft carriers had been destroyed, the whole British operation might have failed. Events were later to illustrate the extreme danger with the sinking of HMS Sheffield and MV Atlantic Conveyor. Could the missiles (and the aircraft carrying them, if possible) be destroyed to eliminate this danger? Plans for doing this by Britain's Special Forces are the subject of this book. Under the code names of 'Plum Duff', 'Mikado' and 'Operation Kettledrum', plans were secretly set afoot to send forces to the Argentine mainland. Through interviews with those involved on both the British and Argentine sides, Southby-Tailyour has compiled a detailed picture of the planning process and the hazardous nature of what was envisaged. One of the striking features was how little intelligence existed about the Argentine airbases that would be targets (Rio Grande and Puerto Deseado). The very secrecy of the planning brought about its own difficulties as did available military assets that could be used, the problems of operating so far from home and the uncertain austral weather. In the event, none of the operations succeeded, two of them being still-born which was probably just as well. The chances of success were very slim and could have led to a considerable loss of life and untold diplomatic and political complications. Southby-Tailyour draws together the threads of a fascinating story from interviews with those involved on both the British and Argentine side, paying deserved tribute to their bravery but also to the factors that prevented these operations from being carried out as planned. Ian Hay-Campbell Friends of The National Archives http://nationalarchives.gov.uk/get-involved/friends.htm