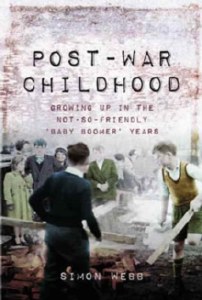 Post-War Childhood : Growing Up in the Not-So-Friendly Baby Boomer Years

Many British baby boomers are very nostalgic about a supposed golden age; a vanished world when children were generally freer, happier and healthier than they are now. They wandered about all day; only returning home at teatime when they were hungry. Nobody worried about health and safety or 'stranger danger' in those days and no serious harm ever befell children as a result.

In Post-War Childhood, Simon Webb examines the facts and figures behind the myth of children's carefree lives in the post-war years, finding that such things as the freedom to roam the streets and fields came at a terrible price. In 1965, for example, despite there being far fewer cars in Britain, 45 times as many children were knocked down and killed on the roads as now die in this way each year. Simon Webb presents a 'warts and all' portrait of British childhood in the years following the end of the Second World War.

He demonstrates that contrary to popular belief, it was by any measure a far more hazardous and less pleasant time to be a child, than is the case in the twenty-first century.

Childhood and Death in Victorian England