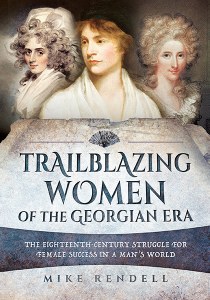 Trailblazing Women of the Georgian Era : The Eighteenth Century Struggle For Female Success In A Man's World

Trailblazing Women of the Georgian Era offers a fascinating insight into the world of female inequality in the Eighteenth Century. It looks at the reasons for that inequality the legal barriers, the lack of education, the prejudices and misconceptions held by men and also examines the reluctance of women to compete on an equal footing. Why did so many women accept that a woman s place was in the home ? Using seventeen case studies of women who succeeded despite all the barriers and opposition, the author asks why, in the light of their success, so little progress was made in the Victorian era.

Representing women from all walks of life; artists, business women, philanthropists, inventors and industrialists, the book examines the way that the Quaker movement, with its doctrine of equality between men and women, spawned so many successful businesses and helped propel women to the forefront. In the 225 years since the publication of Mary Wollstonecraft s A Vindication of the Rights of Woman, questions remain as to why those noble ideas about equality were left to founder during the Victorian era? And why are there still so many areas where, for historical reasons, equality is still a mirage?