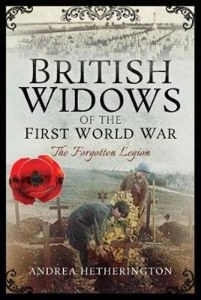 British Widows of the First World War : The Forgotten Legion

Widows of the Great War is the first major account of the experience of women who had to cope with the death of their husbands during the conflict and then rebuild their lives. It explores each stage of their bereavement, from the shock of receiving the news that their husband had been killed, through grief and mourning to the practical issues of compensation and a widow's pension. The way in which the state and society treated the widows during this process is a vital theme running through the book as it reveals in vivid detail how the bureaucracy of war helped and hindered them as they sought to come to terms with their loss.

Andrea Hetherington also describes often overlooked aspects of bereavement, and she features many telling first-hand accounts from the widows themselves which show how they saw their situation and how they reacted to it. Her study gives us a fascinating insight into the way in which the armed services and the government regarded war widows during the early years of the twentieth century.