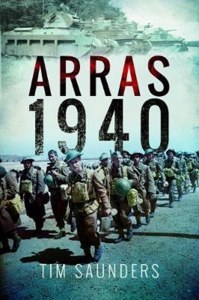 On 21 May 1940 during the ill-fated Dunkirk Campaign the British launched an operation spearheaded by two tank regiments to help secure the city of Arras. This was the only significant armoured operation mounted by the British during the campaign. Poorly coordinated and starting badly the Matilda tanks ran into the flanks of Rommel s over extended 7th Panzer Division.

With the German anti-tank guns, unable to penetrate the armour of the British tanks, Rommel s infantry fell into chaos as the Matildas plunged deep into their flank. The Germans were machinegunned and started to surrendered in large numbers but with the British infantry lagging well behind, fighting their own battles in the villages, there was no one to round them up. Into this scene of chaos entered Rommel whose personal leadership and example started to steady his troops and organise an effective response, despite being spattered with the brains of his aide de camp.

This was classic Rommel but in the aftermath, he claimed to have been attacked by five divisions. The Arras counter-attack contributed to Hitler issuing the famous halt order to his panzers that arguably did much to allow the British Army to withdraw to Dunkirk and escape total destruction.