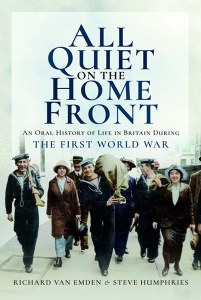 All Quiet on the Home Front

The truth about the sacrifice and suffering on the home front during World War I is rarely discussed. In this book, some of the oldest men and women in the country speak about experiences and events that have remained buried for 85 years. Their testimony shows the same candour and courage we have become accustomed to hearing from veterans of the western front.

Those interviewed include a survivor of a Zeppelin raid on Hull in 1915, a Welsh munitions worker recruited as a girl, and a woman rescued from a bombed school after five days. There are also accounts of rural famine, bereavement and the effects on families back home, and even the story of a woman who planned to kill her family to save them further suffering.