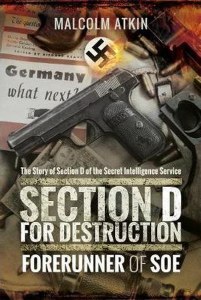 Section D For Destruction: Forerunner of the SOE

When Neville Chamberlain made his famous Peace in Our Time statement in 1938, after the Munich Agreement with Hitler, he may, or may not, have been aware that the new Section D of the Secret Intelligence Service was already making plans to mount an all-out political and sabotage war against Nazi Germany. This was a new form of warfare, encompassing bribery, black propaganda and sabotage by agents described as having no morals or scruples. To the horror of many, it disregarded the conventions of neutrality and was prepared to hit the Nazi state wherever it could do most damage.

Malcolm Atkin reveals how Section Ds struggle to build a European wide anti-Nazi resistance movement was met with widespread suspicion from government, to the extent of a systematic destruction of its reputation. It was, however, a key pioneer of irregular warfare that led to the formation of the famous Special Operations Executive (SOE). His study is the first in-depth account of it to be published since the release of previously secret documents to The National Archives.