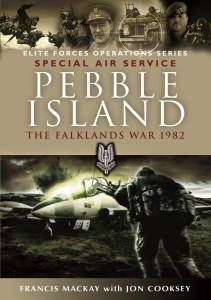 This is the story of the SAS raid on Pebble Island during the Falklands War. In atrocious weather, 48 men of 22 SAS Regiment were landed by Sea King Helicopter on the Island. Their task was to destroy the 11 enemy aircraft located at the Airstrip on the Island and neutralize the Argentinean force posted there to guard it.

The raid was successful and all the Aircraft were destroyed but debate still goes on as to whether the raid was a political gesture to give the British Public some action or whether it was to knock out the Airbase that could have made life difficult for the landings at San Carlos Bay later in the War. The book covers sections on: history of the engagement, training and planning involved, equipment used, weapons file, breakdown of forces engaged, consequences and controversies as well as personal accounts of those involved.