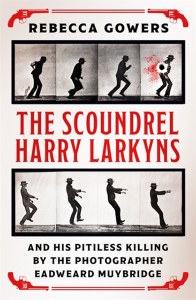 For over a century, a mysterious figure from 1870s California, going by the name of Major Harry Larkyns, has been written off as little more than a liar, seducer and cheat. And he is only remembered at all these days because he was shot dead by the magnificently strange photographer Eadweard Muybridge. A rural court would exonerate the unrepentant murderer, in contravention of all existing laws; and the conduct of the case has barely been questioned since.

But was either the killer or the victim quite what he seemed?In the autumn of 2015, Rebecca Gowers uncovered the startling fact that Harry Larkins, lost brother of her own great-great-grandmother, Alice Larkins, was one and the same as the Harry Larkyns coldly executed by Eadweard Muybridge. Provoked by this into extensive researches, Gowers is now able to lay bare the long-concealed and extraordinary truth about this 'brilliant waif'. Part biography, part crime account, The Scoundrel Harry Larkyns shows how, after a catastrophic childhood, Harry grew up handsome, fragile, courageous, and a beguiling reprobate to boot.

The exploits of his tragically short life would span three continents, and range from a stint as an adolescent army cadet in India, through a louche spell in Second Empire Paris, to his days as a Bohemian rogue in the American Wild West. He found himself behind bars more than once, won glory in battle, and, hardly less dangerously, had a fondness for chasing notorious women. But what would seal his fate was to fall in love with another man's wife.