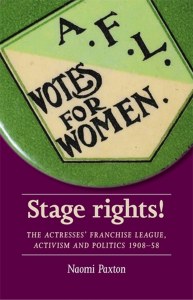 Stage rights! explores the work and legacy of the first feminist political theatre group of the twentieth century, the Actresses' Franchise League. Formed in 1908 to support the suffrage movement through theatre, the League and its membership opened up new roles for women on stage and off, challenged stereotypes of suffragists and actresses, created new work inspired by the movement and was an integral part of the performative propaganda of the campaign. Introducing new archival material to both suffrage and theatre histories, this book is the first to focus in detail on the Actresses' Franchise League, its membership and its work. The volume is formulated as a historiographically innovative critical biography of the organisation over the fifty years of its activities, and invites a total reassessment of the League within the accepted narratives of the development of political theatre in the UK.

We have a limitd number of copies available signed by the author.