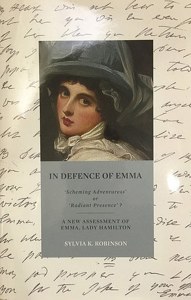 In Defence of Emma : A new assessment of Emma, Lady Hamilton

Determined to disprove the derogatory and unsubstantiated allegations made against her, Sylvia Robinson has meticulously researched extensive source material for this re-assessment of Emma’s life.

IN DEFENCE OF EMMA by Sylvia K Robinson : REVIEW WRITTEN FOR THE 'NAVAL REVIEW' OK readers, I start with a confession. A biography of Lady Hamilton would not necessarily be at the top of my desired reading list so when the book review editor asked me to take it on I started to wonder what I'd done to upset him. I couldn't have been more wrong, for this is an enchanting and bewitching book, sensitively written, that charts the life and travails of probably one of the most misunderstood and misjudged women of her time. It helps of course that the individual in question was one half of the "Posh & Becks" of their day (I'll stop right now with that particular analogy!) for this is very much a book about Nelson as well. But there is far more to it than just that ultimately ill-fated relationship. It is a fascinating tale of a really quite remarkable woman, charting her life from inauspicious early beginnings, through the high-point of residency in Naples and eventually to the sorrow and pain of a lonely death. This in itself would be a compelling enough tale, but add in the Nelson factor and you have a real blockbuster. The author weaves the narrative deftly, making comprehensive use of letters written by and to her subject, including of course many written by Nelson, despite his entreaties to her to burn them. Many of the letters are reproduced in full, which I admit I found a little frustrating at first, but as you progress through the book the wisdom of including them in such detail becomes clear as they carefully chart the nature and make-up of the lead characters in this cause célèbre. Lady Hamilton herself comes across as resourceful and capable, a fighter and survivor to be frank, who understands only too well the power of her beauty. It will be of no great note to learn that both Nelson and Sir William Hamilton were captivated by her, but they were not alone, witness one Commodore Melville who even put off sailing by a day so that he could host her to dinner on board. But Lady Hamilton was far more than just the proverbial pretty face and the book details her ever-deepening involvement in the politics of the region through her close relationship with Queen Maria Carolina. Of course much of the evidence for this is often written in Lady Hamilton's own hand, so one must be slightly cautious but there can be no doubt that she played a not insignificant part in the events in that region. In expanding upon Lady Hamilton's character in this way, the author inevitably tells us a great deal about Nelson too, but from an unusual and refreshing perspective. He is not the lead-player in this story. And in charting her fall, or rather plummet, from grace after Nelson's death we see in all its ugly detail the sheer hypocrisy of the 'standards' of the time. The contrast between the devotion and duty evinced by Nelson with the behaviour of some of those who lauded him in life and death could not be greater. His brother William, granted an Earldom after Nelson's demise, comes across as particularly unworthy of the title afforded him by his brother's heroism. It's here that I would cast my only criticism. The author is unyielding, and perhaps rightly so, in her condemnation of those such as the Earl, whereas Lady Hamilton is treated, in general, much more sympathetically; the author is clearly a fan, but I'm nit-picking. True to form, Lady Hamilton fights her cause as best she can in the face of such adversity, but with little or no effect. One can only begin to imagine how Nelson would have viewed such treatment of her. The book ends swiftly, and somewhat brutally, with her lonely death in Calais. The author does not seek to draw too many conclusions at this point, she doesn't need to, for the facts speak for themselves. But amidst the darkness of that particular episode, there is perhaps a small glint of light as, in almost the final paragraph, it recounts how 'many captains whose vessels we