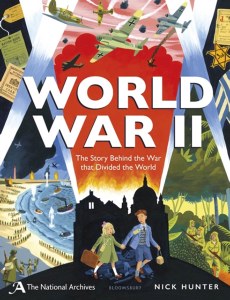 World War II The Story Behind The War

World War II : The Story Behind the War That Divided the World

From Hitler's rise to power to the surrender of the Japanese in 1945, The National Archives: World War II uncovers real-life facts about one of the most terrible wars. In 1939, only a generation after the 'war to end all wars', the world found itself on the brink of conflict again. Explore the real stories from World War II, told through incredible photographs, artefacts and original documents from the National Archives.

From espionage to battle tactics and from code-cracking to heroism, discover how this dreadful war affected and shaped the world. The National Archives is the UK government's official archive containing over 1,000 years of history. They collect government records, from Shakespeare's will to tweets from Downing Street, to preserve it for generations to come, making it as accessible and available as possible.