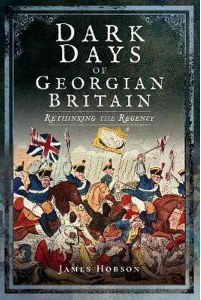 In Dark Days of Georgian Britain, James Hobson challenges the long established view of high society during the Regency, and instead details an account of a society in change. Often upheld as a period of elegance with many achievements in the fine arts and architecture, the Regency era also encompassed a time of great social, political and economic upheaval. In this insightful social history the emphasis is on the life of the every-man, on the lives of the poor and the challenges they faced.

Using a wide range of sources, Hobson shares the stories of real people. He explores corruption in government and elections; "bread or blood" rioting, the political discontent felt and the revolutionaries involved. He explores attitudes to adultery and marriage, and the moral panic about homosexuality.

Grave robbery is exposed, along with the sharp pinch of food scarcity, prison and punishment. It is not a gentle portrayal akin to Jane Austen's England, this is a society where the popular hatred of the Prince Regent was widespread and where laws and new capitalist attitudes oppressed the poor. With Hobson's illustrative account, it is time to rethink the Regency.