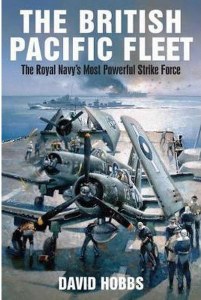 In August 1944 the British Pacific Fleet did not exist. Six months later it was strong enough to launch air attacks on Japanese territory, and by the end of the war it constituted the most powerful force in the history of the Royal Navy, fighting as professional equals alongside the US Navy in the thick of the action. How this was achieved by a nation nearing exhaustion after five years of conflict is a story of epic proportions in which ingenuity, diplomacy and dogged persistence all played a part.

As much a political as a technical triumph, the BPF was uniquely complex in its make-up: its C-in-C was responsible to the Admiralty for the general direction of his Fleet; took operational orders from the American Admiral Nimitz; answered to the Government of Australia for the construction and maintenance of a vast base infrastructure, and to other Commonwealth Governments for the ships and men that formed his fully-integrated multi-national fleet.This ground-breaking work by David Hobbs describes the background, creation and expansion of the BPF from its first tentative strikes, through operations off the coast of Japan to its impact on the immediate postwar period, including the opinions of USN liaison officers attached to the British flagships. The book is the first to demonstrate the real scope and scale of the BPF's impressive achievement and this new affordable edition will be welcomed by all those who missed this major work first time around.