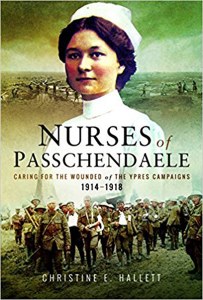 The Nurses of Passchendaele: Tending the WOunded of Ypres Campaigns 1914 - 1918

The Ypres Salient saw some of the bitterest fighting of the First World War. The once-fertile fields of Flanders were turned into a quagmire through which men fought for four years. In casualty clearing stations, on ambulance trains and barges, and at base hospitals near the French and Belgian coasts, nurses of many nations cared for these traumatised and damaged men.

Drawing on letters, diaries and personal accounts from archives all over the world, The Nurses of Passchendaele tells their stories - faithfully recounting their experiences behind the Ypres Salient in one of the most intense and prolonged casualty evacuation processes in the history of modern warfare. Nurses themselves came under shellfire and were vulnerable to aerial bombardment, and some were killed or injured while on active service. Alongside an analysis of the intricacies of their practice, the book traces the personal stories of some of these extraordinary women, revealing the courage, resilience and compassion with which they did their work.