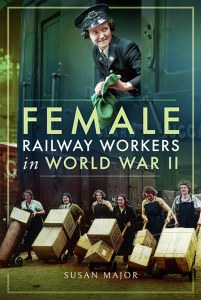 During World War II women took on railway roles which were completely new to females. They worked as porters and guards, on the permanent way, and in maintenance and workshop operations. In this book Susan Major features the voices of women talking about their wartime railway experiences, using interviews by the Friends of the National Railway Museum. The interviews cover many areas of Britain.

Many were working in ‘men’s jobs’, or working with men for the first time, and these interviews offer tantalising glimpses of conditions, sometimes under great danger. What was it about railway work that attracted them? It’s fascinating to contrast their voices with the way they were portrayed in official publicity campaigns and in the light of attitudes to women working in the 1940s. These women talk about their difficulties in a workplace not designed for women – no toilets for example, the attitudes of their families, what they thought about American GIs and Italian POWs, how they coped with swearing and troublesome colleagues, rules about stockings. They describe devastating air raids and being thrust into tough responsibilities for the first time.

This book fills a gap, as most books on women’s wartime roles focus on the military services or industrial work. It offers valuable insights into the perceptions and concerns of these young women. As generations die out and families lose a direct connection, it becomes more important to be able to share their voices with a wider audience.

Female Railway Workers in World War II By Susan Major Published by Pen and Sword Transport, 2018 Susan Major has written previously about railway social history and this book fills a gap about women's work in wartime, which has previously tended to focus on the military services or industry. In March 1941, Ernest Bevin, Minister of Labour launched a plea for 100,000 women to enrol for work in farms, factories and on the railways to replace men recruited into the forces. Within a year there were over 80,000 railway women working among other things as porters, painters, guards, ticket collectors, van drivers, mechanics, locomotive cleaners, and in track maintenance, signals and engineering workshops. They coped with expectations that women could not do the heavy physical work such as shifting goods traditionally reserved for men, the negative attitudes of some of their families, the need to balance child care with employment, and even the lack of female lavatories. Many were paid less than men doing the same work and despite having performed invaluable service contributing to the war effort, most were made redundant after 1945. The book will be of interest both to social historians and railway enthusiasts, especially in what it exposes about attitudes to women and female employment three quarters of a century ago. Much of the content is transcribed interviews from the women themselves, describing such things as being thrust while very young into tough responsibilities for the first time, or living through devastating air-raids, when for example York Station was heavily bombed. However were women ever allowed to become locomotive drivers and work on the footplate such as was happening on Soviet railways? Sadly not, the trade union taking the view that such physical work would not "fall within their physical capabilities and mental outlook." I would hope that a different view would prevail if we still had mainline steam locomotives in 2019. Review by John Hutchings Friends of the National Archives http://nationalarchives.gov.uk/get-involved/friends.htm