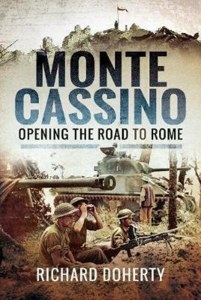 One of the bloodiest European battles of the Second World War was that from January to June 1944 for the Gustav Line, anchored on Monte Cassino, famous for its Benedictine Abbey. Better known as the Battle of Cassino, the campaign only ended when Rome was liberated. With General Sir Harold Alexander in overall command, the Allied Army Group in Italy, consisted of Fifth (US) and Eighth (British) Armies.

Both were truly multi-national with some 20 allies nations involved. The book recognises the contributions of all elements and flags up the inevitable national tensions and rivalries exacerbated by restrictions of terrain and weather. Allied commanders, using ingenuity, highly effective artillery and sophisticated close air support, finally triumphed over their formidable German adversaries.

Monte Cassino: January-June 1944 examines the campaign from the political/strategic levels to the tactical, using official records, accounts from commanders and participants, including interviews. The Author has conducted many battlefield studies and written extensively on the War in Italy.