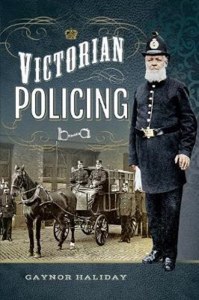 What was life like for the Victorian bobby? Gaynor Haliday became fascinated with the history of the early police forces when researching the life of her great, great grandfather; a well-regarded, long-suffering Victorian police constable in Bradford. Although a citation claimed his style of policing was merely to cuff the offender round the ear and send him home, press reports of the time painted a much grimmer picture of life on the beat in the Victorian streets. Handwritten Watch Committee minutes, historical newspapers and police records combine to reveal an account of how and why the various police forces were set up; the recruitment, training and expectations of the men, the issues and crimes they had to deal with, and the hostility they encountered from the people whose peace they were trying to keep.