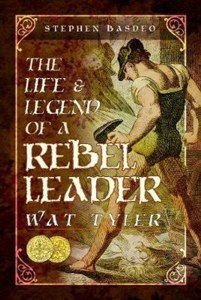 The Life and Legend of a Rebel Leader: Wat Tyler

In 1381, England was on the brink - the poor suffered the effects of war, the Black Death, and Poll Tax. At this time the brave Wat Tyler arose to lead the commoners, forming an army who set off to London to meet with King Richard II and present him with a list of grievances and demands for redress. Tyler was treacherously struck down by the Lord Mayor.

His head hacked from his shoulders, pierced on a spike, and made a spectacle on London Bridge. Yet he lived on through the succeeding centuries as a radical figure, the hero of English Reformers, Revolutionaries, and Chartists. _The Life and Legend of a Rebel Leader: Wat Tyler_ examines the eponymous hero's literary afterlives.

Unlike other medieval heroes such as King Arthur or King Alfred, whose post medieval manifestations were supposed to inspire pride in the English past, if Wat Tyler's name was invoked by the people, the authorities had something to fear.