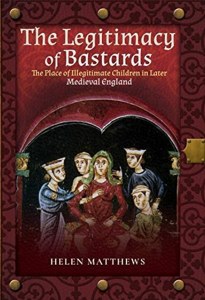 The Legitimacy of Bastards

The Legitimacy of Bastards : The Place of Illegitimate Children in Later Medieval England

For the nobility and gentry in later medieval England, land was a source of wealth and status. Their marriages were arranged with this in mind, and it is not surprising that so many of them had mistresses and illegitimate children. John de Warenne, earl of Surrey, married at the age of twenty to a ten-year-old granddaughter of Edward I, had at least eight bastards and a complicated love life.

In theory, bastards were at a considerable disadvantage. Regarded as filius nullius' or the son of no one, they were unable to inherit real property and barred from the priesthood. In practice, illegitimacy could be less of a stigma in late medieval England than it became between the sixteenth and late twentieth centuries.

There were ways of making provision for illegitimate offspring and some bastards did extremely well: in the church; through marriage; as soldiers; a few even succeeding to the family estates. _The Legitimacy of Bastards_ is the first book to consider the individuals who had illegitimate children, the ways in which they provided for them and attitudes towards both the parents and the bastard children. It also highlights important differences between the views of illegitimacy taken by the Church and by the English law.