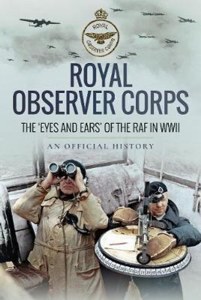 Royal Observer Corps : The Eyes and Ears of the RAF in WWII

The key roles played by the Royal Observer Corps in the Second World War have, all too often, been overshadowed by more glamourous arms of the defence forces. The teams in the Sector Stations, plotting the battles raging above, and the Spitfires and Hurricanes swooping upon the formations of enemy fighters and bombers, present easily-imagined and dramatic scenes. Yet between the radar stations, detecting the German aircraft approaching over the Channel, and the Sector Controls were the little sand-bagged posts of the Observer Corps that provided over-land tracking of the enemy formations.

The Royal Observer Corps (the Royal prefix being approved in 1941) proved a vital link in the communication chain in the defence of the UK, particularly in the Battle of Britain, as it provided the only means of tracking enemy aircraft once they had crossed the coastline. The highly-skilled Observers were also able to identify and count the enemy aircraft, turning blips on a screen into actual types and numbers of German machines. Even after the threat from the Luftwaffe receded after the Battle of Britain and the Blitz, the ROC again came to the fore when the V1s opened a new reign of terror in 1944\.

Because these small, fast weapons were so hard to detect the RAF s fighter controllers moved into the ROC s operations rooms so that they could respond to the V-1 threat more rapidly. In this official history of the ROC written shortly after the war, the corps operations throughout the conflict are set out in great detail. This includes a section on the last flight of Rudolf Hess, as well as one detailing the work of those who were selected for employment as Seaborne Observers on ships during the D-Day landings, where their specialist identification skills were used to prevent the all-too prevalent instances of friendly fire .

This history provides an account of the ROC which is just as important in understanding the operations of the corps as the Observers were in the defence of the United Kingdom during the Second War.