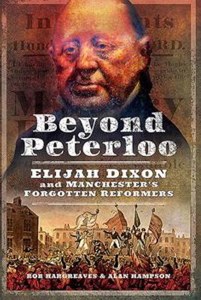 Elijah Dixon played a key role in the Blanketeer's March of 1817. Arrested, chained in double irons and imprisoned without trial, the episode set the stage for the Peterloo Massacre. Everybody in Victorian Manchester knew of Elijah Dixon.

In Beyond Peterloo, Robert Hargreaves and Alan Hampson bring Elijah's previously overlooked yet vital contribution to social reform to life. Set against the backdrop of the Blanketeer's March of 1817 and the Peterloo Massacre of 1819, they reveal the fascinating story of his life and work as Manchester's forgotten reformer.