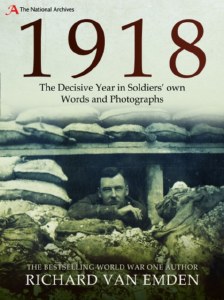 1918 : The Decisive Year in Soldiers' Own Words and Photographs

1918: The Fight for Victory. The Decisive Year in Soldiers' Own Words and Photographs is the next volume in the remarkable series of books from the best-selling First World War historian Richard van Emden. Revisiting the winning formula of diaries and memoirs, and above all original photographs taken on illegally-held cameras by the soldiers themselves, Richard tells the story of 1918, of both the ferocious spring offensive that so nearly brought victory for the Germans in the West, and the tenacious British rearguard fight that thwarted them.

The book also tells the vivid story of the Allied breakthrough and the return to open warfare that was to bring victory in November 1918. His previous books, The Road to Passchendaele and The Somme have sold over 30,000 copies in hardback and softback, proving that the public appetite is undiminished for new, original stories illustrated with over 150 rarely or never-before-seen battlefield images. The author has an outstanding collection of over 5,000 privately-taken and overwhelmingly unpublished photographs, revealing the war as it was seen by the men involved, an existence that was sometimes exhilarating, too often terrifying, and occasionally even fun.