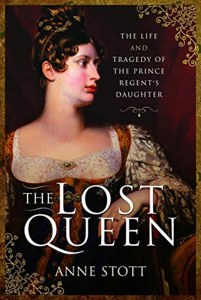 The Lost Queen : The Life & Tragedy of the Prince Regent's Daughter

As the only child of the Prince Regent and Caroline of Brunswick, Princess Charlotte of Wales (1796-1817) was the heiress presumptive to the throne. Her parents' marriage had already broken up by the time she was born. She had a difficult childhood and a turbulent adolescence, but she was popular with the public, who looked to her to restore the good name of the monarchy.

When she broke off her engagement to a Dutch prince, her father put her under virtual imprisonment and she endured a period of profound unhappiness. But she held out for the freedom to choose her husband, and when she married Prince Leopold of Saxe-Coburg she finally achieved contentment. Her happiness was cruelly cut short when she died in childbirth at the age of twenty-one only eighteen months later.

A shocked nation went into mourning for its people's princess', the queen who never was.