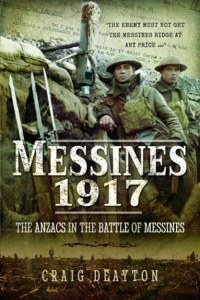 The enemy must not get the Messines Ridge at any price So read the orders to German troops defending the vital high ground south of Ypres. On 7 June 1917, the British Second Army launched its attack with an opening like no other. In the largest secret operation of the First World War, British and Commonwealth mining companies placed over a million pounds of explosive beneath the German front-line positions in 19 giant mines which erupted like a volcano.

This was just the beginning. By the end of that brilliant summer's day, one of the strongest positions on the Western Front had fallen in the greatest British victory in three long years of war. For the Anzacs, who comprised one third of the triumphant Second Army, it was their most significant achievement to that point; for the men of the New Zealand Division, it would be their finest hour.

It is difficult to overstate the importance of Messines for the Australians, whose first two years of war had represented an almost unending catalogue of disaster. This was both the first real victory for the AIF and the first test in senior command for Major General John Monash, who commanded the newly formed 3rd Division. Messines was a baptism of fire for the 3rd Division which came into the line alongside the battle-scarred 4th Australian Division, badly mauled at Bullecourt just six weeks earlier.

The fighting at Messines would descend into unimaginable savagery, a lethal and sometimes hand-to-hand affair of bayonets, clubs, bombs and incessant machine-gun fire, described by one Australian as '72 hours of Hell'. After their string of bloody defeats over 1915 and 1916, Messines would prove the ultimate test for the Australians