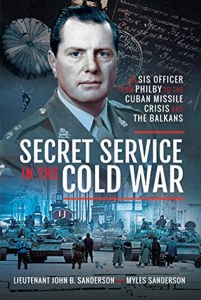 Secret Service in the Cold War

The Second World War had been won, but relationships between the Western allies and the Soviet Union were becoming increasingly strained, as the nuclear arms race made world peace precarious. It was vital that Britain knew the Soviets' intentions and military capabilities, both offensive and defensive. As a Military Attache in Sofia, and Commandant of an Intelligence Centre in the Balkans, it was SIS officer Colonel John Sanderson's job to find out.

Sanderson handled agents who operated secretly behind the Iron Curtain at the height of the Cold War and organised hidden arms depots for stay-behind agents in case of a Red Army invasion. Based on Sanderson's letters and personal accounts of his time with MI4 and MI6, we learn how he was sent to observe sessions of the Paris UNO Security Council in 1948 and to recruit emigres for infiltration behind the Iron Curtain, into Communist Bulgaria. Fluent in French and Bulgarian, in 1949 Captain Sanderson was posted to Sofia as a Press Attache with diplomatic immunity, reporting on the Communist show trials.

For over thirty years, John Sanderson worked for the British Secret Services - with his last mission, aged 74, as exciting as his first, being helicoptered into Sarajevo with an SAS team at the height of the Balkan War.