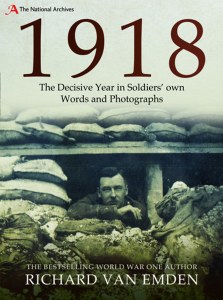 1918 : The Decisive Year in the Soldier's Own Words

1918 proved to be the Allies’ year of victory, but what a monumental effort it was! From the moment Germany launched its all-out Spring offensive to win the war, British and Empire troops fought a tenacious and often last-ditch rearguard action. The Germans gambled with their best, battle-hardened men in one desperate offensive after another, searching for a decisive breakthrough that never came.

In those dark days of March, April and May 1918, Allied troops were tested as never before, their morale placed under microscopic scrutiny, their will to win examined and re-examined. Once again, the soldiers tell their story, giving their own perceptive thoughts and profoundly moving insights while never forgetting the humour that helped them survive.

And when the tables were turned in August, there began a campaign that would throw the enemy across the old ruptured battlefields of 1916 and 1917 and beyond, into open untouched countryside in the full bloom of summer. It took a hundred days of relentless fighting to reach Mons, the Belgian town where it had all started four years before.

A century on, best-selling First World War historian Richard van Emden builds on the success of his previous books, The Somme and The Road to Passchendaele, with this next volume including an extraordinary collection of soldiers’ photographs taken on their illegally-held cameras. Utilising an unparalleled collection of memoirs, diaries and letters written by the men who fought, Richard tells the riveting story of 1918, when decisive victory was grasped from near catastrophe.