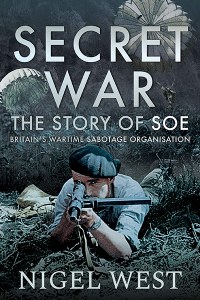 Secret War: The Story of SOE

In this new and revised edition Nigel West strips away the secrecy that has surrounded the Special Operations Executive since it was officially wound up in 1946, and reveal the breath-taking political naivety, operational incompetence and ruthless manipulation. Despite the heroism of individual agents who suffered appalling privation to further the organisation's dubious objectives, there is an underlying tragedy of dreadful proportions. Secret War is a detailed analysis of SOE's structure and performance and describes its successes and failures across the globe.

The book casts doubt on the official histories authorised by the Cabinet Office and offers evidence of the setbacks that jeopardized D-Day and gives an account of the paramilitary units dropped behind enemy lines immediately after the invasion which saved SOE's reputation. This book is a highly provocative but authoritative history of the organisation that existed for less than six years but was to have a lasting impact on the world's post-war development.