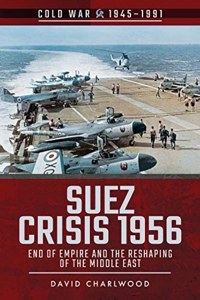 Suez Crisis 1956 : End of Empire and the Reshaping of the Middle East

In response to a secretly pre-planned Israeli attack in the Sinai, France and Britain intervened as peacemakers'. The invasion of Egypt was supposed to restore British and French control of the canal and reaffirm Britain's flagging prestige. Instead, the operation spectacularly backfired, setting Britain and the United States on a collision course that would change the balance of power in the Middle East.

The combined air, sea and land battle witnessed the first helicopter-borne deployment of assault troops and the last large-scale parachute drop into a conflict zone by British forces. French and British soldiers fought together against the Soviet-equipped Egyptian military in a short campaign that cost the lives of thousands of soldiers, along with innocent civilians. Suez Crisis 1956 is a fast-paced, compelling short history which moves between London, Washington and Cairo to tell the story of a crisis that brought down a prime minister and heralded the end of an empire.