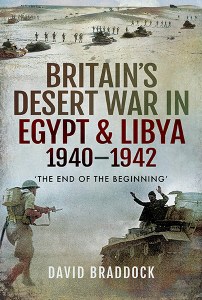 The desert war in Libya and Egypt between 1940 and 1942 has deservedly attracted the attention of many historians. Fought in an unforgiving yet strategically important landscape, the fortunes of the implacable opponents swung wildly. While best remembered for the duel between Montgomery’s Eighth Army and Rommel’s Afrika Korps and the iconic battle of El Alamein, this fine account describes that there was much more to the story than that.

In addition to the role of Imperial and Italian troops, the cast of characters included the controversial Auchinleck, the long-suffering Alexander and many other gifted commanders. Gazala, Bir Hakeim, Alam Halfa and Tobruk battles were among the many fiercely fought battles.

The author highlights the vital roles of the Royal Navy, disrupting enemy supplies, and the Royal Air Force, which eventually gained command of the air.

For a concise account of this decisive campaign, David Braddock’s authoritative yet highly readable history is unlikely to be surpassed.