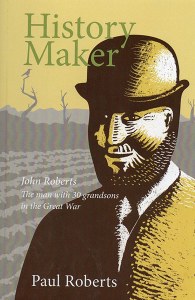 History Maker : The Man with 30 Grandsons in the Great War

The astonishing true story of John Roberts, a retired Devon farm worker who had 30 grandsons serving in the Great War. How he became an unlikley record-breaker and how his grandsons acheived extraordinary things in exceptional times as they faced life and death on the front line is revealed in this fascinating book.

The book also higlights the sacrifice made during the war by families in Devon and the controversy that arose between farmers and their sons over recruitment to the Armed Forces.