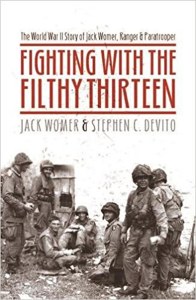 Fighting with the Filthy Thirteen : The World War II Story of Jack Womer - Ranger and Paratrooper

In recent years the public has become aware of the Filthy Thirteen, the most notorious squad of fighting men in the 101st Airborne Division, and the true-life inspiration for the movie "The Dirty Dozen". They became singular within the Screaming Eagles for their hard drinking, and savage fighting skill - and that was only in training. Just prior to the invasion of Normandy, a "Stars and Stripes" photographer caught U.S. paratroopers with heads shaved into Mohawks, applying war paint to their faces. Unknown to the public at the time, these men were the Filthy 13. In this long awaited work one of the squad's integral members-and probably its best soldier-reveals his own inside account of fighting as a spearhead of the Screaming Eagles in Normandy, Market Garden, and the Battle of the Bulge.

Jack Womer was originally a member of the 29th Infantry Division and was selected to be part of its elite Ranger battalion. But after a year of grueling training under the eyes of British Commando instructors, the 29th Rangers were suddenly dissolved. Bitterly disappointed, Womer asked for transfer to another elite unit, the Screaming Eagles, where room was found for him among the division's most miscreant squad of brawlers, drunkards, and misfits.

Beginning on June 6, 1944, however, the Filthy Thirteen began proving themselves more a menace to the German Army than they had been to their own officers and the good people of England, embarking on a year-of ferocious combat at the very tip of the Allied advance in Europe. From parachuting behind German lines on D-Day to the gritty defense of Bastogne, Womer fought beyond the breaking point of the soldiers around him. In this work, with the help of Stephen DeVito, Jack provides an amazingly frank look at close-quarters combat in Europe, as well as the almost surreal experience of dust-bowl-era GI's entering country after country in their grapple with the Wehrmacht, finally ending up in Hitler's mountaintop lair in Germany itself.

Throughout his fights, Jack Womer credited his Ranger/Commando training for helping him to survive, even though most of the rest of the Filthy Thirteen did not.