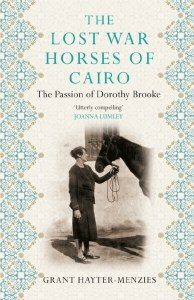 The Lost War Horses of Cairo : The Passion of Dorothy Brooke

In 1930 wealthy Scottish socialite Dorothy Brooke followed her new husband to Cairo, where she discovered thousands of suffering former British war horses leading lives of toil and misery. Brought to the Middle East by British forces during the Great War, these ex-cavalry horses had been left behind at the war's end, abandoned as used equipment too costly to send home. Grant Hayter-Menzies chronicles not only the lives and eventual rescue of these noble creatures, who after years of deprivation and suffering found respite in the Old War Horse Memorial Hospital established by Dorothy, but also the story of the challenges of founding and maintaining an animal-rescue institution on this scale.

The legacy of the Old War Horse Memorial Hospital and its founder endures today in the dozens of international Brooke animal-welfare facilities dedicated to improving the lives of working horses, donkeys and mules across Africa, Asia and Latin America.